About Us – Bad Dog Agility Academy

In addition to two full time professional careers and two young children, Esteban and Sarah have been active agility competitors since 2000.  Together, they have competed with rottweilers, golden retrievers, border collies, and a miniature American shepherd at every height from 16″ to  26″. In 2008, they created Agility Course Maps as a free resource for the agility community.  In 2011-2012, they created Bad Dog Agility and started the Bad Dog Agility Podcast. Since 2013, they’ve offered high quality, low cost, online agility instruction at the Bad Dog Agility Academy. 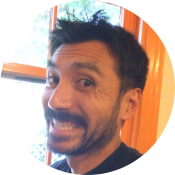 Hi, my name is Esteban Fernandezlopez and when I’m not training dogs or running at a trial, I’m a wound care physician. I live in Pearland, Texas, USA. I currently compete with Golden Retriever Gitchi and Border Collie Miriya.

Before medical school, Esteban started agility with his golden retriever Gypsy, who achieved MACH3 and the Golden Retriever Club of America’s Agility Dog Hall of Fame distinction, with appearances at both USDAA and AKC national championships. During the course of medical school and the rigors of residency training that followed, his rottweiler Sammie earned MACH, with memorable placements in both the finals of the AKC Invitational and AKC National Agility Championship challenge round. His 16″ border collie Rook has appeared in the challenge rounds of the 2011 and 2012 AKC National Agility Championships, and won both international standard and jumpers at 26″ at the Reliant Park World Series of Dog Shows in 2009. In both 2014 and 2015, Esteban and golden retriever Gitchi (co-owned with Susan Fraser) competed at both the AKC National Agility Championship in the 26″ class and the AKC International Team Tryout. Esteban is the only handler to ever run three different large dog breeds at the AKC/FCI World Team Tryout. His current young border collie, Miriya, debuted at the end of 2014. 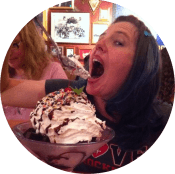 Hi, my name is Sarah Fernandezlopez and when I’m not teaching agility, I’m a computer programmer. I live in Pearland, Texas, USA. I currently compete with Border Collie Venture.

A long time competitor and instructor, Sarah rounds out her busy schedule as a full time software programmer and mother of two children. She has competed with four different breeds at the highest levels of AKC and USDAA, including both national championships as well as the AKC Invitational. Sarah’s current dog is a two year old Border Collie named Venture.